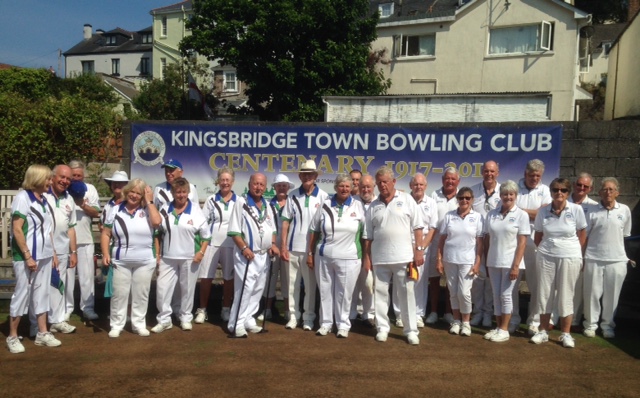 Presidents Vicky and Mike, with the two Senior Vice-Presidents, five Past Presidents, the Bowls Devon Administrator and two guest players from Oreston B.C. and Madeira B.C., played a game against Kingsbridge Town B.C. to celebrate their Centenary. This fixture should have been played last season, but had unfortunately to be postponed as it coincided with the funeral of the 2017 Lady President, Ruth.
A very enjoyable four rinks of triples was played on a green which was still recovering from being badly flooded earlier in the year. As often happens in these games, by some “creative accounting”, President Vicky declared the game as a draw. At tea, the 2017 Men’s President, Colin Healy, was asked by President Vicky to present a Commemorative Certificate from Bowls Devon to the Club. The County also gave a donation to the Club, and we were informed that they had received sponsorship from a number of companies in the town for their Centenary, and this money had been spent on improving their facilities.